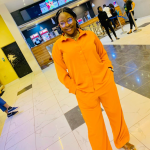 The Board of Trustees, BoT of the Association of Movie Producers, AMP, has just annulled the controversial general elections of the body that produced two presidents in one day.

The Board also has dissolved all the organs set up for the purpose of the elections.

The elections which held in Lagos and Asaba respectively on Saturday, August 29, produced two presidents.

While Mr. Myke Parish Ajaere was elected as president of the body in Lagos, Ms Peace Anyiam-Osigwe was elected for the same position eight hours later in Asaba, Delta State.

In a resolution taken in the face of the crisis threatening to tear the body apart, the BoT also has constituted an interim Caretaker committee to restore peace in the troubled association and organize a credible election within six months from the date of constituting the committee.

Adegbenro Islamiyat is a Yoruba Language Communication expert. She has a wide experience in writing news, stories and articles in Yoruba language. She also doubles as a Programme presenter and voice over expert. Message her on adegbenroislamiyat74@gmail.com